Are you asking yourself how much does an EZ bar weigh? I’ve got the answer to this question and many others below.

The EZ bar is quite an underrated piece of gym equipment, but it can leave anyone with questions about it. Let’s take a closer look at the weight of a standard EZ curl bar and more!

How Much Does an EZ Bar Weigh? 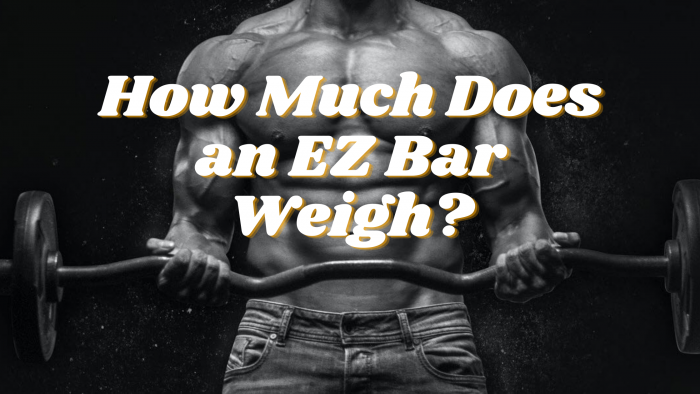 Let’s answer the main question first: How heavy is an EZ bar? The weight of an EZ bar typically varies between 18 to 22lbs. With that said, it’s possible to find an EZ bar here and there that weighs 15lbs, maybe a little less.

I can’t imagine the need for a heavier EZ bar than 22lbs. That would kind of make it not so easy to use (sorry, couldn’t resist a cheesy pun).

But, there are even heavier curl bars. These are Olympic EZ curl bars, and they can weigh up to 25 pounds. That’s the size of a fairly large weight plate. No wonder they’re Olympians!

EZ bars typically look like a smaller version of standard barbells. However, they’re typically smaller (more on that below) and feature curved handles. EZ curl bars are often best for isolation lifts instead of compound lifts.

What Are The Differences Between an EZ Bar and Standard Barbell?

It’s also important to understand how an EZ bar and barbell differ from one another. While they might look pretty similar, there are some major differences between these two items. Here’s a closer look at the differences between EZ curl bars and standard barbells.

On the other hand, an EZ curl bar features curved handles. Other than these handles, it maintains a straight shape for the purpose of loading weights.

An EZ bar features curved handles to help make lifting weights more comfortable. This feature is most noticed in those who experience pain in the hands, wrists, and forearms when lifting with a standard barbell.

A standard barbell (the one you see in the gym or use to bench press at home) ranges in length from four to six feet. Some barbells are longer than six feet, but they’re usually exclusive to powerlifters.

An EZ standard curl bar is shorter in length than a standard barbell. Most EZ curl bars are 46 to 48 inches in length. There are also Olympic curl bars that are a bit longer, ranging from 50 to 54 inches.

As you can imagine, adding and removing weights from either a barbell or EZ curl bar will generally be the same. The differences between these two types of barbells have to do with their end connections.

Most EZ curl bars (mine included) use butterfly clamps for the purpose of adding or removing weight plates. On the other hand, standard barbells often use rotatable cuffs to keep weights safely secured.

When Should I Use an EZ Curl Bar?

If you are interested in or currently own an EZ curl bar, it’s beneficial to learn what exercises are best. As you probably can guess, EZ curl bars are best suited for curl exercises (as the name of this item suggests). But that’s not all it’s good for. Here are three of the best exercises to do with a standard EZ curl bar.

We’ll get this one out of the way since it’s the most obvious and probably what you were expecting to see. What you might not know is you can still get a lot of variety out of only using an EZ curl bar for bicep curls.

To switch this exercise up and activate different muscles, change your grip placement after every few workouts while doing bicep curls. It might seem like a small change, but it can lead to some impressive strength and size gains.

Don’t believe that this exercise is a great way to get bigger arms? Maybe Phil Heath in the video below will convince you otherwise.

The name of this exercise might sound a little intimidating, if not scary. But when you properly do skull crushers, this exercise is an incredibly fast way to build bigger triceps.

Performing this exercise might feel a little awkward at first. But the benefits are well worth it. To get started, you’ll need an EZ curl bar and your chosen amount of weight. I’d recommend starting out light, especially since this might be a new exercise for you.

Next, lie down on a flat bench and get the curl bar ready like you’re going to bench it. Instead of benching it, you’ll do a type of reverse curl. I never feel that explaining exercises in text is best, so here’s how to do this exercise in video form.

Lastly, I also wanted to mention that bent over row. Typically, you’ll do this exercise with a standard barbell. However, you can also do bent over rows with an EZ curl bar. This exercise works your shoulder and back muscles.

With a standard EZ curl bar, you might benefit from using this item’s curved handles to get a better grip. Plus, the design of this bar makes me great for knocking out high rep sets with lower amounts of weight.

There you have it, everything you need to know about using an EZ curl bar. These types of bars are great for certain types of exercises. I also feel that there’s an essential part of any home gym equipment. For more fitness-related tips, visit newgenerationfitness.net.

Affiliate Disclosure: New Generation Fitness may receive compensation from certain companies through the use of affiliate links. We test each product thoroughly and review each supplement honestly. Affiliate links help with cost of managing this website and will never change the price you pay for a product.